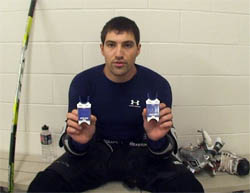 A few months ago we gave you a detailed look at the Trion Skate Weights with our Trion Sk8W8 overview . Since then, we have had the chance to take the skate weights to the hockey arena and personally test them out. In this post, we will give you a full Trion SK8W8 review.

For more information on the skate weight and a video of how it fits under the skates, be sure to visit our Trion Skate Weight overview.

In the Dressing Room

and fit the weight into my skates. According to HockeyShot.com the Original skate weight will fit the following sizes:

The more weight plates that the Trion skate weight has, the longer it will be.  So that is why the Junior fits in smaller skate sizes, but the Pro will only fit in larger skate sizes.

I was able to fit the Original sized skate weight under my size-10 Easton Stealth 9 skates without any problems. I locked the weights into place and gave my skates a good shake to make sure that the weights would not come loose. Everything fit perfectly, and I decided to go with all three weights for an hour long skate.

On The Ice with the Trion Skate Weights

I got out on the ice early before shinny started (shinny is a hockey term for a “pick-up” hockey game).  So

I had some time for some skating drills. I started with a few hard laps around the rink, then did some stop-and-starts for a few minutes. I wanted to start with some hard skating drills to really test the weights out, so I did the usual lightning drill and zig-zag drill.  At this point a few guys were coming on the ice and were probably wondering why I was skating so hard.  I remember being surprised that I didn’t really feel any burning in my legs.  I skate about 4 times a week though and I am a pretty good skater.  So that might have something to do with it.  But the weights worked great under my skates and a few times I even had to check to make sure they were still there.

Playing hockey with the weights on

It is important to understand that the skate weights are meant for practices and skating drills, but are not recommended for games. You should not where the skate weights while you play competitive or organized hockey.  But I was just playing pick-up hockey so I decided to leave them on. We only had 12 skaters, so I got a lot of ice time. I made sure to back check and skate hard for the puck and not just coast around.

To be honest, I did not feel much after skating for an hour. I only did the skating drills for the first 10 minutes and then left the weights on for half the game. After half an hour, I took the skate weight off my left skate, and left the other on to do a comparison. After the full hour of skating, my right leg only felt a bit more fatigued then the left. I think because I am already a fairly strong skater, the Skate Weight Pro would have been a better fit for me because it is heavier.  In this case, however, I only had the Original available for testing.  This just demonstrates the need to make the proper selection so you can get the most out of the skate weights.

Using the skate weights was a breeze.  They fit nicely under my skates and stayed there almost the entire time. The only time the weights came out was when I blocked a hard pass and the puck hit the weight. I received a few passes in my skates throughout the game and the weights never came out, but there is a chance the weight will come out if the puck hits them.

I did not get a deep burn from skating with the weights in.  My legs felt like they got a bit of a better workout, but it was not substantial. I am a fairly strong skater though and pretty quick.  Again, I should have been using the Pro skate weights instead of the Original model.

Here I will give my overall thoughts on the weights, who I think would benefit from them, and the pros and cons

There aren’t too many negative things to say about the weights. I would have liked a better workout, but it’s partly my own fault for not getting the Pro model. The other thing I have to mention is that one weight did come out after being hit with a puck, but the weights are meant for training, not for playing hockey.

There were quite a few things I liked about the weights

I liked skating with the weights and definitely will use them again. I am going to get the Pro model though so I get a bit more of a workout. It will be interesting to see if I get faster after skating with them for a few months. I recommend the skate weights to younger players who have good form, and want to build their skating muscles. Remember that the best way to improve your speed and acceleration is with proper technique. If you are already a good skater then get the Pro model.

In this video, we take the skate weights to the hockey arena and test them out, then tell you what we think about them!

Where to Buy the Trion SK8W8

If you want to buy the skate weights, you can find them, and other great training aids at Hockey Shot. Check out the roll-up shooting pads and the Green Biscuit, too.  They are a few of my favorite products. 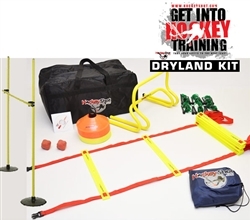