I’ve fallen in love with TRUE over the past 2 years. Let’s get that out of the way, I’m a fanboy of just about any product they put out. The overnight success of their skates when they were formerly VH footwear was quite remarkable and ultimately the reason I picked up my first set 2 years ago. Back in the summer of 2016 I had seen what felt like almost every pro goalie switch to VH skates over the previous season; and from the moment I stepped on the ice with them I’ve understood why.

So, I picked up a set of 2-piece TRUE goal skates a few weeks ago from the TRUE headquarters in the Winnipeg (video link at the bottom of the page). TRUE has been great to me, I was able to get a 3D fit scan from former vice president Garth Smith (from the VH days) and had unparalleled custom service. This go around TRUE was nice enough to allow Andy and myself to come into the headquarters to heat mold my 2 piece skates and see the facility a bit and share that with you.

Let’s touch on performance. In my opinion nobody on the market in my opinion can touch TRUE.. Actually, that isn’t an opinion that’s a fact. They custom build the skates from the inside out. Scott Van Horne has been perfecting this art before I was even a twinkle in my father’s eye 🙂 and every skate is done on a 1 by 1 basis. They’re so far ahead of the competition now Bauer and CCM are starting to copy the exact same 3d foot scanning technology, software and hardware the VH/TRUE have been using for at least 2 years.

The power I get with every push, the custom fit which produces ZERO sore feet, the comfort and energy transfer that leads to the power in every movement. All of this is second to none. I made a video a few years ago talking about how Bauer was the best skate on the market at the time; and Bauer makes a good skate. I was a lifelong Bauer goal skate user. Ever since I became a goalie at 10 years old Bauer skates were the only thing I’d ever worn on my feet and at this point in time I would never use anything but TRUE. Nobody on the market right now can deliver the same hand craft, personalized and fitted skate that TRUE can and its simple as that. 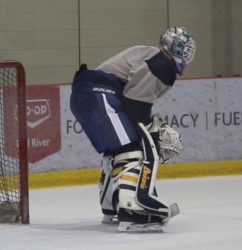 Spec wise my skates are normally 11EE so I guess you could say these are 11EE skates. I had the Lundqvist style heal loop removed because I don’t use it, so I saw it as a waste of weight. Bauer 3mm holders and custom TYDAN blade steel with my VIU logos on the steel. White binding trim on the tongue. I opted to not put my initials or name on the tongue this time because when I get a new set of TRUE skates in the future, I want to be able to sell these are max value to be able to afford new skates.

Only knock you’ll ever hear from me about TRUE is price point. I think we can all agree that ALL goalie equipment this day and age is way over priced and prevents a lot of kids from getting into the sport. However, TRUE skates are worth every single penny. Assuming you have enough to afford the price tag. I could be wrong, but I believe the custom boot is 700 plus 200 for a Bauer holder or cowling combo and the custom 1 piece is 1100. Again, I could be wrong, but I believe that’s the prices they are charging now since they took pricing off their website. Plus, taxes obviously.

Higher attack angle: Essentially without a cowling you can get even lower in the ice to push across

Higher up: I believe with the holders the skates are taller, so you will be slightly taller when on your feet than in a cowling skate.

Weight: Obviously without the cowling you save a good amount of weight. TheGoalNet told me that the 2-piece skate boot is the same boot they use for cowling combo skates so assuming that is true, you’re saving a HUGE amount of weight when comparing the holders to the cowling.

To recap, even switching from the cowling boot combo. It’s going to take a bit of adjusting but I’m sold that I’m going to love them, and they will replace my old skates as my favourite skate I’ve ever used. I can’t wait to see what TRUE produces next. 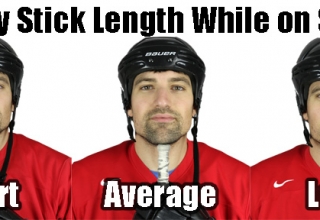 Why Length Matters when Buying a Hockey Stick When you buy a hockey stick, …