So recently I custom ordered a pair of Bauer 1S goal pants. I loved the set of navy 1S pants I had last year. They were extremely mobile, protective and everything I look for in a goal pant. However, with this upcoming season (like my last 3 years) we have to wear pantshells and I hate pantshells. They’re uncomfortable, restricting and just annoying. So, I figured a custom set of colours would replace the need for them. 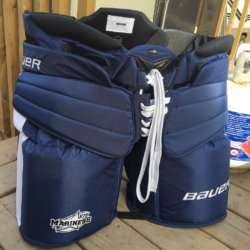 So these are XL sized 1S goal pants. Their royal (Buffalo Sabres) blue with a white stripe down the side. You’ll notice that I did a few mods on them because Bauer wouldn’t do them in a custom order. So I moved the ab pad back so I could feed skate laces throughout the entire front (Braden Holtby/ Dustin Byfuglien esc) because I personally think it’s sick style. I also modded the belt. Normally a stock 1S belt runs from the inside to the outside and through the ab pad and back, personally I like more of a CCM style fit and feel with the belt running strictly on the inside, so I just took it out of the front loops and ran it through the inside. Also got a custom team logo on the right thigh so that way it looks like our pantshells, minus the uncomfortably of shells.

I did notice a few changes from the stock retail 1S goal pants to the custom. First off there are way less logos and “stuff” like that on the inside. There is no indication of size or anything on the tail pad, instead just a white patch with my last name over it. No 1s logos on the back and also the padding and plastics on the front thigh seem to be way thicker and heavier than the retail version. 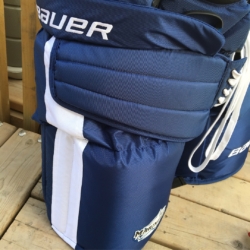 Couple people reading this are probably asking why I ordered custom 1s pants when the 2s stuff is days away from launch. Well I don’t play professionally right now (obviously because I suck) so I don’t see a reason why I’d need to conform to the NHL spec sizing regulations. I’m also accustomed to a certain size of pants so why change it because the 2S are the new streamlined pants.

Bauer delivered these in pretty quick timing as well. I believe they quote me at 6-8 weeks and I believe they came in 5 ½ so that was pretty awesome. Anyway, I’m excited to start breaking these in and use them for next season.

Thanks for reading this review article. For more review coverage, follow me up @ Trav4oilers on Instagram, Twitter and YouTube. If you want to see these custom pants in action, then click the video below to see it in action. In this video I unbox and reveal my brand new TRUE 2-piece goal skates at the TRUE headquarters, but I also debut a bunch more gear in that video. 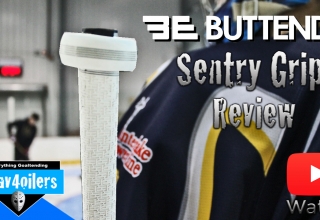