Growing up I always preferred foam core and wood goal sticks but as I’ve gotten older I’ve started to appreciate and become a huge fan of composite goal sticks. The weight, the flex, the feel and everything about them has made me a believer in composites. Recently I got a TRUE HT6.0 goal stick. This is TRUE’s brand new composite goal stick. I got it right when it came out and I’ve been using it quite a bit since I got it. Here is what I think.

So, I’ve been using 1S sticks almost exclusively over the last year and a half. I’ve dabbled with a Vapor 1X goal stick for a bit but the 1S stick has set a new gold standard for me with performance, so this TRUE stick has some big shoes to fill, but to my pleasant surprised the TRUE stick I’ve become a fan of.

First off, it’s no 1S. Even the old NXG is still not being touched by any current composite sticks. However, it did take a bit of adjusting to the TRUE stick (again coming from the 1S) but for the 26’ paddle version it does a great job deflecting pucks. Great responsive feel. Puck handling is good, I feel the stick could use a bit more torque or flex to it but it still does a good job when puck handling. 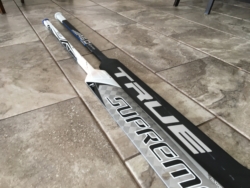 So far, I haven’t had any durability issues with the sticks. I realistically don’t think it’s going to last me to the end of the summer. I’m hoping that it can last until my custom order of 2SPro goal sticks get here towards the end of the summer, but I think for the price point it’s a solid stick. Like all goal sticks, you never know the value until you’ve found out how long it lasts so time will answer that question.

Thanks for reading this review article. For more review coverage, follow me up @ Trav4oilers on Instagram, Twitter and YouTube. If you want to see this TRUE HT6.0 stick in action, then click the video below to see it in action. In this video I unbox and reveal my brand new TRUE 2-piece goal skates at the TRUE headquarters, but I also debut a bunch more gear in that video. 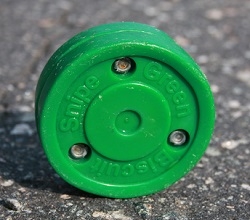