About a month ago we received the Speedtrac X radar gun. After using the radar gun for the last month we wanted to share what we thought. We have already given you a detailed look at the Speedtrac. This article gave you an overview of how the radar gun looks and shows how it is supposed to work. Now we will give you an in depth look at how it ACTUALLY works and what we thought.

Taking the Speedtrac X to the street

We took the Speed trac to the streets to test and show you how to use it, set up and ease of use, accuracy and consistency of readings, durability and more.

Setting up the Radar Gun

Setting the Speedtrac up is super simple, all you have to do is plug it in, or put in 4 C cell batteries, push the on button, and you can start shooting. The Speedtrac X automatically starts displaying MPH, to switch it to KPH just push the KPH button, a red light will blink on the right side when it is displaying speed in KPH.

How to get the most consistent and accurate readings

The Speedtrac comes with an owners manual, and this is the first time I would recommend reading it! Actually, now that you are reading this review you won’t really need to ;). There are different ways to set the radar gun up depending on the sport. For hockey the best way to set it up is right behind the net (far enough back to not get hit) with the face of the radar gun facing where you are shooting.

Through my experience I have found that if I point the face of the radar gun at where the puck is coming from, I will get the most consistent readings.

According to the manual “the SpeedTrac X radar displays the speed at which a target object moves in line with the unit’s projected signal. A target passing at an angle through the signal will result in a displayed speed that is lower than the target’s true speed” it goes on to say “a 10 degree entry angle reduces the actual speed by about 2%”

According to the manual the way to get the most consistency and accuracy is to basically use the radar gun as the target (with a net in front of it of course). We tested this thoroughly and found it is the best way to get accurate readings.  Even when you have the radar gun set up properly you will get the odd misread. Below is a page from the manual showing the zone of maximum accuracy and sensitivity

We have done a lot of shooting with the Speedtrac X gun. I have had shoot outs with friends, used it for training and used it on and off the ice. My standard set up is just to bring a milk crate filled with hockey pucks, dump the pucks out and then set the radar gun up behind the net on top of the milk crate. My shots are always the hardest when they are low to the ice, so that is why I don’t usually bother setting it up near the top corner (except in the picture below, which was one of the first time I used it)

Training with the Speed Trac 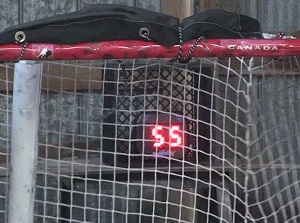 I really liked training with this thing, I was just watching some of the videos I shot when I first got it and my speeds were not that great. My wrist shots and slapshots have GREATLY improved since training with the Speedtrac. I love it because it gives me instant results and feedback. This was a good way for me to tweek my technique and learn the best way to take a slapshot. The display is really easy to read.

Another great way to use the radar gun is with friends and other hockey players. Whenever my friends came over they all wanted to test their shot speeds, it is funny to watch them try as hard as they could because they were absolutely sure that they could shoot 95 MPH (most of my friends registered between 50 – 70 MPH) If you play on a team the guys (or girls) would LOVE it if you brought this thing out during practice.

Durability
This has to be the biggest surprise I got from this radar gun. Judging from the packaging and feel of the material I was sure that this was some cheap, made in china piece of crap. I was pleasantly surprised when it worked consistently and showed accurate numbers, but I was more surprised at how resilient it is!

So far I have accidentally

After all of that, this thing is still working like a charm. Either it is a lot tougher than it looks, or I am just very very lucky.

Battery life
The battery life on the Speedtrac radar gun is great! I am still on my first set of batteries and I have been using the radar gun for about an average of 30 minutes a day for over a month now. When the batteries need to be replaced the screen will read LO (Make sure you don’t have it upside down or you will think you are shooting 07MPH :D)

This video shows you how to use the Speedtrac X, the best way to set it up, a few of the features of the radar gun, and us testing it out!

When I first got the Speedtrac I thought it looked like a kids toy and was not going to work. I am really impressed with how well it worked, and that with all of my abuse it still works! I also really liked how much I was able to improve my shot, and that I have proof too!

Price and Where to Buy the Speedtrac X Radar Gun

The Speedtrac retails for about $150 depending on where you get it. Luckily for you we know a few places that have great deals on the Speedtrac. If you would like to buy this radar gun you can find the best prices (and other cool hockey gear) at  Hockey Shot 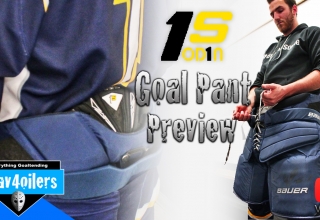