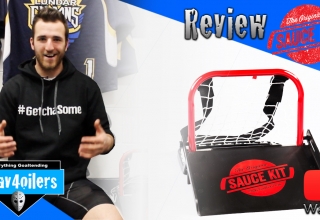 Hey guys, Trav4 here and in this article I want to talk about the Original Hockey Sauce Kit. So first off I just want to point out that a LOT of people underestimate the sauce kit as a training tool first off. It’s been featured on multiple massive media outlets (sports centre, NHL Network, etc) and as much as it is fun to bring a sauce kit out to the beach with a couple buds and some ladies, its equally as fun as a training tool. You see it used in the NHL All star skills competitive every year and every player and their dog is using one on Instagram now a days BUT I have yet to see a single goalie using it and I think thats a problem. Puck handling and the ability to advance the puck, help out your defence and kickstart some offence in the process as well.

So the boys over at The Hockey Sauce Kit sent me a party pack right before christmas (thanks to them for the demo unit). It came with 2 nets, 2 shooting boards, 8 pucks I believe (which I sadly had stolen out of my vehicle a couple weeks after getting the product) and a beer koozie. My initial goal when I first got the green light that the sauce boys were sending product, to show the goaltending community that the sauce kit isn’t just for players. If anything it might be even more important to goaltenders. If you’re a player and you’ve ever played with a goaltender that never touched the puck outside the blue paint, it’s painful to watch but the only thing worse than that is one that over plays the puck and can’t aim for their life. Thats why I got the sauce kit, to work on my sauce and long range game. Anybody can hit the 5-10 foot pass or set the puck up behind the net but who can hit the 15-100ft saucer pass up the ice? Not many goaltenders.

So there are a lot of ways to integrate the Sauce Kit into your training program and more. You don’t need to drive 20 minutes to the gym/rink to use it. All you need is some open space in your backyard, front sidewalk or drive way. If you’re adventurous you can even get away with using it in your house. Then from their all you need is a stick (which you most likely already have) and a couple pucks. Then from there you work on saucing the puck from various distances, angles and maybe even get to banking shots off an object and in for trick shots. If you and the boys are going to the beach or the cottage for the day, bring the sauce kit. Great way to pass the time, work on your saucing abilities and pass some time. Better than spending hours upon hours on your phone which most of society (myself included sometimes) are really bad at doing now a days. Check out this video of Rob LaLonde from ButtEndz and myself mixing in a quick game of Sauce back in March when we spent the day kicking it.

Attracting Girls…..YES You Read That Correctly

If you’re like me then you’re always looking for new ways to attract and impress girls, I had a girl I was seeing recently and she wasn’t too knowledgable about the game of hockey. Not to get to personal but I love a girl who can understand and get interested in hockey since after all the game of hockey is all I’ve known since I was 4 years old. So I showed her the sauce kit and I thought it was a pretty unique and creative way to spend time together, get her to experience the game first hand and try to build some type of common interest. Aside from a 5’3 woman trying to “juggle” a blocker, catch glove and a stick I’d say it went pretty smooth.

As far as the build and durability goes I’d say its pretty good. I’m not gonna get into whatever plastic the sauce kit may or may not be made out of but what I can tell you is I had no problems so far. I got 2 sauce kits when the sauce boys originally sent me the package but around new years I lent one of the guys on my team my sauce kit for a weekend and he came back with the netting ripped and sauce ramp detached and screws missing. Idk how he managed to do it… but he did it and I couldn’t get an answer as too how he managed to do it so aside from that, I’ve had no issues since then. 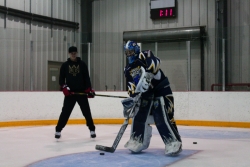 I think the sauce kit adds a lot of value to somebody who loves the game, has a passion for it and for getting better. If you spend $50 that’ll get you just the net. $100 will get you the net, plastic shooting pad and some pucks. From there you can spend all the way up to $240 for 2 nets, 2 boards, pucks and other accessories which is fine but all of these bells and whistles are on a case by case bases. I think the sauce kit can make a great birthday/christmas gift. Great gift if you’re a female looking for something to get your junior hockey playing boyfriend for a special occasion but the value is based upon what you want to get out of the kit. Is it a toy? Is it a training tool? Is it both and I think ultimately only you can answer that.

So I think at the end of the day this purchase is gonna come down to personal preference. If you want a training tool that can be fun to play with the boys before practice/at the beach or a great way to get better in your spare time, this is the product for you. If not then you may be better off investing your cash into something else. For me personally I think this product would be worth the $50-100 investment to get started and see if you want to invest in the other merch later. For all of these reasons I’m giving the Hockey Sauce Kit a 9/10.

So what do you guys think? Do you like the sauce kit, have you tried it? Whatever it may be, let me know on Insta, Twitter or Facebook all @ Trav4oilers. Don’t forget to watch the video review down below and subscribe on Youtube. I want to thank you all a lot for reading this article and hopefully I’ll see you again in the next video. 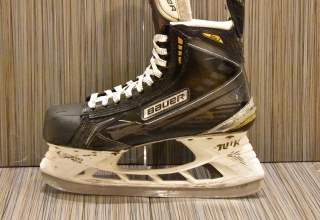