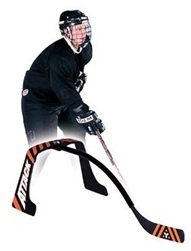 This weeks featured product is the Attack Triangle. This is a hockey training aid that will help

you become more creative and develop new moves. A lot of hockey players will practice stickhandling at home and on the ice, we usually set up a line of pucks or pylons to stickhandle around. The Attack Triangle provides a more game like obstacle.

Price – The Attack Triangle sells for $29.95 on Hockey Shot they also have options for a “professional” version that sells for $59.95 for a 2 pack. The pro model is made for heavier use and will work better on the ice.

What You Get – The Attack Triangle comes in five pieces that easily fit together to form the shape of a players skates and stick. For added re-enforcement you can put in some screws that also come with the Attack Triangle.

Well this is an easy one, put the Attack Triangle wherever you want on or off the ice and practice any move you can think of. Some moves off the top of my head are simple fakes, the double deke, under the stick, over the blade (forehand and backhand), toe drag around the blade, between the legs, inside out, and the backhand toe drag. If I had the option between a pylon or the Attack Triangle I would definitely pick the triangle!

Who Would Benefit from the Attack Triangle? – This would be a really good training aid to use if you have a few kids that play hockey, or if you have regular backyard hockey games. This can also be used off the ice for ball hockey and off-ice training. If you, or your kids practice stickhandling on a regular basis then the Attack Triangle would be a nice addition to your hockey training aid collection.

Assembly – It was really easy to put the Attack Triangle together, there were five pieces and each one easily fit together (using male and female ends) if you want to really keep them in place you can use screws, but I just pushed the pieces together so it would be easier to dis-assemble later

Does it Work – The concept of the Attack triangle is so simple that it would be hard for it not to work. The triangle was fun to use as opposed to a pylon or a row of pucks. The odd time I would hit the Attack Triangle and a piece would come off so I would have to put it back together, I guess I should have installed those screws afterall!

There are not to many things that I could find wrong with the triangle, it is so simple that it is hard to find a fault. The only thing that I could think of is that it sells for $30, you would think that a few plastic pieces would sell for much less.

Where to Buy the Attack Triangle

The x-passer is another product in the growing list of hockey puck rebounders. What …