In this article I want to touch on my custom Tydan Blades I got recently. Before I switched to VH skates 2 years ago I saw skate’s in the same light that you see a blocker or helmet. It’s just another piece of equipment that can have a few perks here and there. Since getting into my VH (now TRUE) skates it’s opened my eyes in regard to what individual components of a skate can do for your game. From the foot bed, to the ankle guard, to the cowling/holder, etc. In these VH skates I’ve been using a Bauer cowling. The same cowlings/blades I’ve been using for years.

Hopefully that sets the stage for this write up because the Tydan Blades are revolutionary I think. On their website they state the perks for the steel are as follows…..

Did They Work For Me?

I usually don’t get my skates sharpened that often because I’m straight lazy. I’ll think to myself that I need to get them sharpened but eventually put it off for a few more weeks until caving and getting it done. I’ve had these blades for a few weeks already and haven’t even had to think about getting them sharpened cause they retain an edge extremely well. I’ve also noticed a lot less edge breaks, slip outs during pushes and overall much harder pushes where I can get more weight behind it.

I think that the coolest part about these blades is the custom engraving. Tydan Blades can put your name, team logo, number or anything else you can imagine on the blades. Personally, I went with the letter logo of Vancouver Island University on mine. It’s clean and simple and not too much of a distraction from the actual blades. 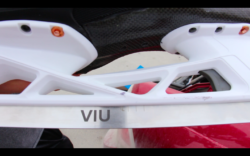 Overall, I think these blades could not have turned out better. I personally think they should be making a version that works with a 3mm cowling because I would have been using them months ago. These blades have improved my skating and would have been nice to have this a little sooner but better late than never.

So, let’s touch on price point. So, for 170 and 120 bucks for their 2 different goal skate blade models, to my knowledge these come in at the most expensive goalie blades on the market. However, I have no problem paying a premium price for a product as long as I get some premium value and it’s a premium product and these are without a doubt a premium product. I’d highly recommend them.

Whats the verdict? These are worth the cash and for all the reasons listed above. If you have the spare cash, you’re going to want to pick up a pair.  Thanks for reading this review article. For more review coverage, follow me up @ Trav4oilers on Instagram, Twitter and YouTube.

UPDATE Aug 5th: Thanks for all the contest entries on Youtube. We are going …