The Goalie Guru Grip, sounds like some cheap sex toy eh? Not in this case. Recently I was approached by “The Goalie Guru” on Instagram to test out his new paddle grip product. Usually I’m pretty skeptical when I get approached for reviews or product “testings” cause ever since I started doing this “Youtube” thing I’ve come across a few companies that are only looking for promo or want you to sellout. I want to genuinely like a product and more importantly actually get to know the people behind the product/company when I’m getting involved. Luckily this was the case and I was blown away by such a simple product. 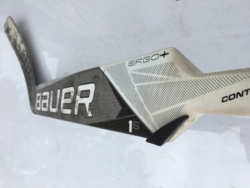 So the Goalie Guru Grip is a paddle grip design to be glued on your stick and sit in between your index and middle finger. It’s supposed to improve control of deflecting pucks, reduce vibrations and overall give a much more improved feel for the game. I found ALL OF THIS to be true.

The install process is a bit confusing as the directions have visuals that are 2D and not 3 dimensional. A lot of people were putting it on the side of the paddle which isn’t where its supposed to go. It comes with a mini super glue and to my surprise, even after putting it on a composite 1S stick, 10 seconds later I literally could not pull it off. 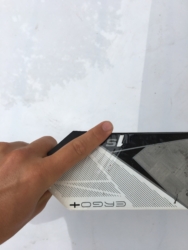 Performance wise, like I said before. This thing gives way more control on pucks, no vibrations from shaft shots. More precision when in my RVH deflecting pucks with my blade on my glove side or paddle on the blocker side. Everything about it feels natural and I’m sitting here; still thinking to myself as I write this review. Why hasn’t somebody come up with this product yet, or at least one that I’ve seen myself. 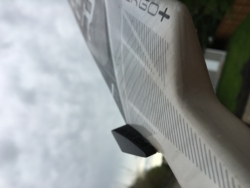 I want to thank Goalie Guru for approaching me and opening my eyes to this product. To my knowledge I don’t think it’s in stores so if you’re interested in picking one up, click the link here to check it out. Especially for 15 bucks it’s totally worth checking out. I mean 15 bucks is beer money for the weekend. Save your 15 bucks and go play some hockey instead 🙂