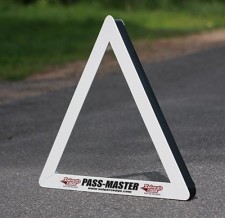 Purpose – The PassMaster is a hockey training aid that is designed to help hockey players work on their passing and one-timers at home or on the ice. The design is fairly simple:  one metal triangle with three posts, wrapped with a large elastic band.

Assembly – When you receive the device you get the metal triangle, a large rubber band, some felt pads and some metal spikes. All you have to do is put the rubber band around the posts, and the foam pads on the posts and you are ready to practice.

Price – The Passmaster retails for $99.95 at Hockey Shot

Taking the PassMaster to the Streets

The idea of the PassMaster is simple.  You pass a puck into it and the puck will be passed back. In order to use it off-ice you either need a hockey shooting

board to provide a smooth surface for a regular hockey puck to slide on or a Green Biscuit to use on a rough surface. After the Passmaster is put together, there is no set-up time.  Just put it in place and you can start passing.

Short passes work great on and off the ice. The PassMaster will send the pucks back to you just as fast as you can pass them in.

Long passes work well, but the elastic band can only pass the puck back so hard. On the ice there is not much friction, so the PassMaster does a great job with long passes (as long as you have good aim!) Off the ice, if you get any further than 15 feet away from the PassMaster, your chances of getting the puck back are greatly reduced. This is mostly due to irregularities in the passing surface like cement or asphalt, and the added friction.

Hard passes from in close and a distance work great. I was passing the puck into the rubber band about as hard as I could and the PassMaster never failed to return the puck (except for when I hit the metal parts). I did notice that the rubber band seemed to dampen the passes on the return, it seemed like the rubber band was not rebounding the pucks as fast as it should. I put a cinder-block on top of the device to keep it from moving when I was doing the hard passes and that helped quite a bit.

One-timers are very easy to practice with the PassMaster.  I just set it up off to the side, passed the puck into it, quickly set up and then hammered the shot. With the roll-up shooting pad, there is 8 feet of material between you and the PassMaster so there is enough time to set up. If the shooting pad were any shorter then I think there would not be enough time for a proper wind-up.

The next penalty is for the PassMaster movement with hard passes. I expected this to happen, and it is very easy to fix, but I just thought I would mention it. The metal is very heavy though so it barely moves unless you put a really had pass into it.

In this video we show you how the PassMaster works and test how hard you can pass a puck into it.

Where to Buy the PassMaster