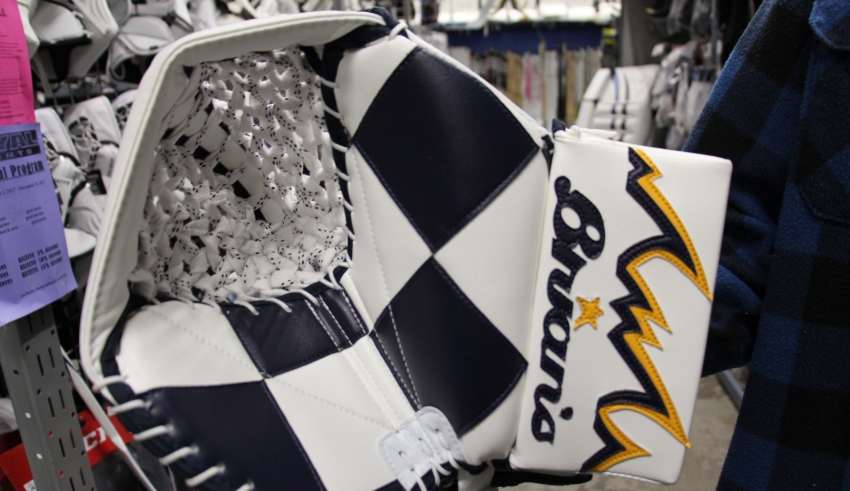 So in this article I want to break down my Brian’s Sub Zero 3 catch glove I got back in November. So this IS NOT  a heritage glove or an optik or a blend of optic and heritage. It’s a Sub Zero 3 (mostly stock) with a 2 piece thumb and cuff, a floating anchor tee with a skate lace pocket and that BEEEEEAUTIFUL checkerboard graphic and a few other colour and graphic mods..

The checkerboard graphic, Brian’s absolutely nailed. I felt that after the last Padskinz set I did on my Bauer 1S set (with the Potvin wing/flare look) I wanted to incorporate that into the graphic because as much as I love the “classic look” I want to be original and at least throw my spin on it. So we added the “flare” graphic on the cuff to replace the classic brains star on the cuff and also on the back of the cuff. However, they did the cuff graphic backwards from what I originally wanted, but I love it the way it looks backwards. Looks more like the traditional checkerboard graphic Trevor Kidd debuted 20 years ago in Carolina so luckily that worked out. I also modded the backhand so that the navy section is nylon and the rest is Clarino leather so it won’t discolour and will still look fresh over time.

So right out of the box this thing open and closed like an absolute dream. You can be the judge yourself in the video showing it off out of the box. Aside from my lisp, which is now gone cause I no longer need a retainer for my braces :D……… I don’t think I could have asked for anything more out of this glove. The floating anchor tee was originally something I was a little on the fence about but after chatting with Chris Jozwiak from Brian’s, I was told on the floating anchor tee which is essentially the stock anchor tee; which Is a super thin spine tee and then anchored down. However with the floating version there is no anchor and the tee floats in the skate laces in the pocket and I cannot tell you how nice that is to catch pucks with. At this moment in time I don’t think I will ever switch from a Brian’s glove after this. Puck literally GO TO DIE in this pocket. Pucks don’t pop out and its added to the overall confidence in my game in the glove department 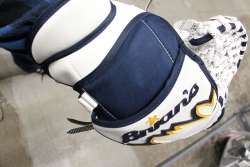 It’s a little early in the process to comment on the long-term durability but to date I haven’t had a single issue with the glove. Aside from the white nylon laces and skate laces in the pocket discolouring slightly (and large amount of puck marks) I’d say the glove looks basically brand new. 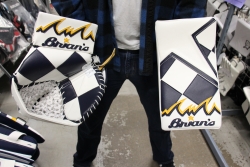 I’m just going to say this is the best glove on the market and best that I’ve ever had with no questions asked. The floating anchor tee pocket, the skate laces, the flexibility in the 2-piece cuff. Even though there are mods from the stock sub 3 I have never been more satisfied with a glove than I have with my “checkerboard” Sub Zero 3 glove.

So thanks for taking the time to read this. If you want to see more action with this glove or any semi-entertaining content on the internet, hit me up on YouTube or social media.