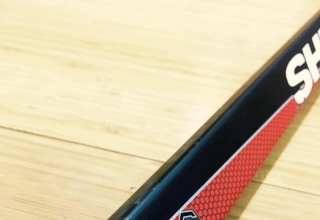 In a product market heavily dominated by CCM and Bauer, there are always a few smaller companies trying to make an underdog push. One of those companies is Sherwood, who have slowly been making a climb back in popularity with their composite sticks. In the past two years, two of their more popular sticks released have been the Rekker EK60 and the Sherwood BPM 150. The EK60 is personally one of my favourite sticks (after heavy experimentation with other brands and products); and I’m about to discuss the top five reasons to give it a try!

I’ve had the opportunity to try the Bauer Vapor 1X, Warrior QRL, Easton Stealth CX, CCM Super Tacks and Sherwood BPM 150. What consistently kept me going back to the EK60 was a fantastic feel in the VRF2 blade. For my personal preference, it’s everything I want in a stick. A crisp, lively feeling blade that’s extremely stiff and durable like a tank. My first EK60 lasted me six months, skating five or more times a week. The blade feels similar to that of the Bauer Vapor and QRL line, so if you like a live and “pingy” blade, I’d definitely look into this.

The EK60 was the first stick to include what Sherwood calls “Graphene” – “a nanomaterial stronger than steel”. It’s coated on the lower third of the shaft and increased durability without adding weight. This means the stick should hold up very well to hacks, slashes and the general wear and tear of hockey. In my opinion, it holds up in spades. Of the several EK60 sticks I’ve owned, they have all lasted a minimum of 3 months (the longest being six months).

The stick clocks in at a retail price of $229.99 CDN ($199.99 US on HockeyMonkey). That places it nearly $100 dollars less than any other top-of-the-line model from competitors. Of course, this would exclude any discontinued models that stores will sell on clearance, but you’re still getting a high-end stick for an excellent price. This also means that there’s: a) Less risk in trying the product, b) it’s easier to replace cost wise, and c) the stick makes for a great fringe/emergency pickup in a worst case scenario.

BONUS: For those who may be smaller (height-wise or weight-wise), Sherwood is one of the (if not) only companies to offer a senior sized stick in 65 flex. Has anyone ever wanted to be the next Brett Hull? Or perhaps Johny Gaudreau for the younger readers (he actually uses a 55 flex as per Warrior). You’d be surprised how effortless release can be.

The reason I ranked the weight so low is because as a hockey store employee I often receive the following criticism: “The stick is too light” – and for a lot of people, that may just be the case. The EK60 weighs in at an astounding 385 grams in a senior model. This is a combination of the graphene and their “Ekore” technology – a process that removes all excess materials from the stick. There are a lot of players who find a stick around 420 grams to be more than enough. Bottom line? It’s truly a “feather-lite” stick. Some people will like it, some won’t.

Here’s the last “reason”, but also the area where I criticize the stick the most. The reality is: yes the stick is cheap, and yes it’s incredibly light. It’s reliable, and it’s easily my go-to choice in a composite stick. But I have to admit that it lacks a lot of new technologies that would help with shooting (that other competitors seem to boast). It doesn’t have ribs, an elliptical shaft, or the aggressive taper that the 1X or QRL boast.

The stick still has excellent pop: but compared to other sticks I’ve tried, it doesn’t do as much of the work for you. Therefore? You pay for what you get. It’s a reliable stick, light and it boasts 12k carbon fibre weave and excellent blade (the carbon construction of many high end sticks in the market). With that in mind, I’m still constantly open to trying new products in search of something new and ground-breaking.

That’s the review guys, what are your thoughts on the EK60? Loved it? Hated it? I still can’t find another stick I’d rather use, but I’m always excited to see what products companies are releasing in the future, especially True, Warrior and Sherwood. That’s all for today!

Availability of the EK60

Composite or Foam Core? This has been a question asked by hockey parents, players …