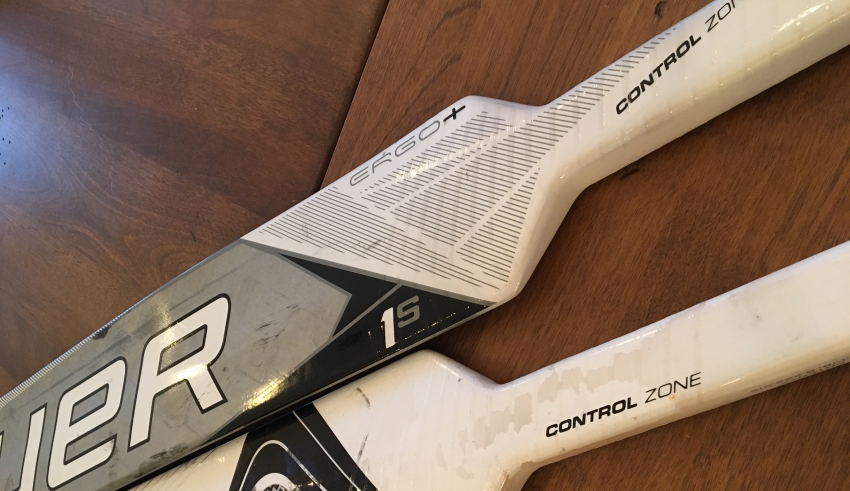 This has been a question asked by hockey parents, players and the industries experts for years and years. I remember as a kid my dad and I would go out to sporting shops around Winnipeg; looking for a new stick. Each and every time getting a different take from each “sales rep”.

I feel that in my 11 years of playing goal, I’ve leart a lot about sticks via research, working with some of the industries reps and experts but most importantly going through a lot of lumber during my playing career. From the first ever CCM Heaton wood stick I got in 2006 when I became a goalie to picking up my 3rd 1S goal stick last week. I’ve learnt a lot about both sides of this argument and in this article I want to shed some light on that topic. 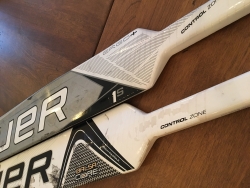 The biggest knock that you’ll hear on composite sticks is typically no custom features, zero durability and they just aren’t built to last, not to mention every company asks you for an arm and a leg for them. What they lack in all of those major categories they make up for in short term performance before breaking and I’ll be honest. I 100% agree with this statement. In my life I have never owned a composite goal stick that lasted more than a month at a time, that is until I picked up a 1S goals stick. I’ve used the Bauer Reactor (hybrid composite), CCM Premier (2 of them actually),  Nike One95 and Bauer 1S. All performed well, but were well over $200 at the time of purchase and lasted no more than 3 weeks. I received 2 demo Premier sticks from CCM and they lasted a combined 6-8 skates if my memory serves me correctly.

I remember InGoal Mag tweeting at me about how CCM had really brought their A game with the Premier Plus and it was a “game changer”.  I’d say that was the top 2 if not the most disappointing pieces of equipment I used to date considering the high hopes that I had for it.

On the other hand the Bauer Supreme 1S composite goal stick I feel will change the composite game for years to come. Everything from it being the lightest goal stick ever created, to the torque/whip it has when playing pucks. Active feel deflecting shots, aesthetically the most appealing stick I think they’ve ever built and more importantly durability. My 1st 1S stick lasted 6 weeks and a bit. I wasn’t going to get another due to the high price point of $330 but after going back to the heavier traditional foam core I couldn’t help myself and the 2nd one lasted 9 months without a single sign of wear until stepping on the ice with NHL prospects over the summer on Vancouver Island when an Oiler prospect broke it on a snapshot to the shaft.

I think a lot of people are beyond scared of splurging on a composite because of the price tag but I feel that if it lasted twice as long as a foam core and is twice the price then you’re on a level playing field. I got no problem spending some money on a quality product but with the ridiculously high prices every company is charging now a days for gear, if their product brings value to the table and the Supreme 1S goal stick is in my opinion the only composite on the market worth even considering. 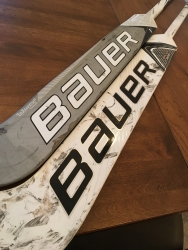 For the last 10 years or so I believe the foam core has been the most popular style of stick. Gone are the days of wood sticks and loads of splinters down the shaft of your stick. Foam cores bridge the gap between wood and composite but in my opinon there is still a massive distance between the two.

It’s What You Expect

It’s without saying you can expect a foam core to be heavier, thicker and have more gurth with less “finesse” and minus all the bells and whistles that composites do. Bauer claims the Vapor 1X goal stick to be the “perfect” blend between composite and foam core and I’ll be the first to tell you that couldn’t be any further from the truth. Yes, the vapor 1X is a great stick when compared to the rest of the foam cores but the stiffness, weight and visuals I feel are major draw backs to this stick regardless of comparing it to a foam core or composite. 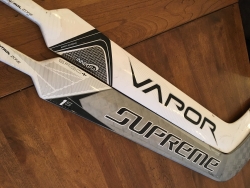 One thing most foam cores don’t come with is a warranty. Usually they last longer than composites but my first vapor stick lasted me 3 weeks before breaking which Bauer wasn’t willing to cover on warranty because one of the 2 serial numbers were missing. Still frustrated about that; as well as I wish they’re smooth out this process because it was frustrating and disappointing but that’s another rant for another day.

At the end of the day you have more choices and options for goal sticks on the market than there are goalies to use them, but I’d have to side on the side of the foam core strictly on value. The 1S is THE best stick on the market to date without a question. If somebody put a gun to my head for a stick that’s gonna give me a bang for my buck and the most satisfaction, I’d go with the 1S composite goal stick. There is no comparison but if I had to pick anything else I would guarantee I’d use a composite. That is at least until the new CCM Premier 2, Warrior CR1 and Bauer 2S composite goal sticks launch this April or May.

Thanks for checking out this article. If you don’t already make sure to follow me on my social channels all @ Trav4oilers for reviews, live action vlogs and more. If you want to see a specific topic covered, hit me up on the social or leave a comment down below. 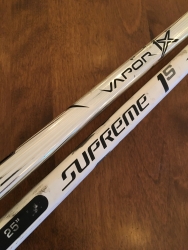 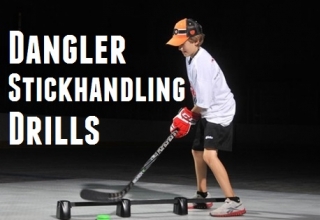