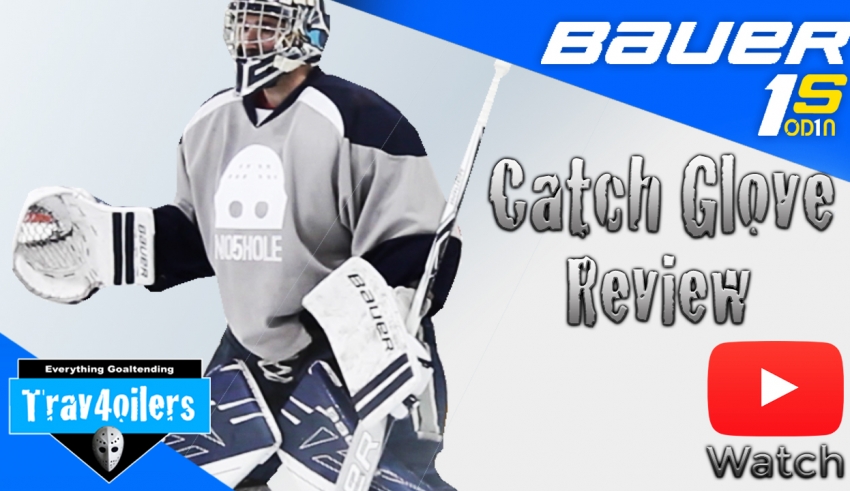 Hey guys, Trav4 here. So in this article I’m giving you my updated review on the Bauer Supreme 1S Catch glove. So previous to getting a “product testing” deal done with Bauer to get my hands literally into this glove. I had been a lifelong Reebok/CCM glove user. Reason for that was the consistency, the injection moulded cuff, the 1 piece design (which was around for a while but it really took off when Reebok debuted it on the Premier 3 line) and the amazing graphics. All these were contributors to why Reebok (now CCM) had a stranglehold of the market and don’t get me wrong, for the most part they still do due to the Carey Price effect but I think the 1S glove gives CCM all they can handle and more. Here is why.

So basically when I got this, I expected much of the NXG glove since I had tried that on in stores a few times. After all it is just a 1s glove without the OD1N “kick” as Bauer calls it but man was I surprised. Out of the box its incredibly light weigh and my 1st impressions were that I’d be getting stingers regularly, especially against Junior level shooters. First 10 shots I took with it I was cringing and thinking to myself “OH $*#T I’m gonna get tagged for some really bad stingers here” because you feel like there is no protection right at the break point but to this day (almost a full year later) I still haven’t had A SINGLE stinger. Aesthetically I think it’s a very attractive glove. The graphic I will talk more about in the custom options. Here is the video I posted of my 1st impressions last summer.

So the performance is slightly divided for me because I got my first 1s catch glove in August 2016 and then Bauer was nice enough to send me another set at the end of November/beginning December I believe. I thought the 1st glove was awesome but the 2nd blew the 1st out of the water. 2nd 1S glove I got closed 100X better than the first and overall was hands down the best glove I could ever have asked for and thats keeping in mind I’m comparing this to the original 1S glove I got that I gave a solid score to in the original review. To cap off this point, the 1S catch glove gives me added confidence that I can catch anything, the pocket is really nice sized and I’ve had a few pop outs but nothing that put it above or behind the competition in this aspect, however I do think that all companies should go to a stock skate lace pocket, the skate lace just adds a much more cushioned feel to the glove. This comes stock with nylon lacing and I haven’t had any issues with it so far but I do think skate laces improve it and also add a little style. I feel like my glove is significantly faster as well, the glove is insanely light and after I realized that I wasn’t going to get stingers and started to accept that the glove had me protected I was taking full advantage of the light weight construction. The glove has Bauer’s 37.5 technology which basically dries it faster and it makes a difference, if I take a day off in between ice times the glove will be dry but not crusty. The 1 piece cuff which is stock is nice, I’ve recently started becoming a fan of the 1 piece because its a lot more stable and consistent with rebounds and weight distribution.

So at this point I’ve had zero problems with the durability of the 1S glove. Only real problem I had with the first glove is that in the infamous goalie fight I got into after hitting one of the other teams players, at one point I’m pretty sure it was either a screw on his helmet or his visor that cut the finger lacing on the binding of the glove, however I tie it back and everything was good. Aside from that, just the normal nylon discolouration of the nylons like any other glove you would have. As far as the degree of the closure, I know that the 1S glove was designed to compete with the CCM 600 style break so it’s more of a 75 degree closure which has been my preference for the last year. On a side note I’m sure 98% of you are going to want to see that fight, not because you like seeing goalies beat people up but because you want to see that lace break. Well for that reason, I got you covered below!

So much like the rest of the 1S line, not really any custom options to speak of and if you are as nerdy about gear as I am, this will drive you nuts. You have a handful of stock colours to choose from on the face graphic, the binding and then the pocket lacing. For specs you have the stock 1 piece cuff or the 2 piece which I’ve only seen Henrik Lundqvist use up to this point. Stock nylon lacing in the pocket or skate lace pocket. Aside from that nothing really here for anybody to right home about. If anything I find the lack of options slightly disappointing.

So you’re spending $600 + taxes on a glove and you want to know if this is worth the investment. In my experience and after 1 season of testing the glove at a junior level I fully support it and feel that it’s worth the $600 price tag. It’s durable and best performing glove that I’ve tested so far. I know a lot of people fall under the Carey Price effect and wear CCM because of him but if you’re in the market for a new glove and aren’t fanboying too much over CP31 then I would highly recommend this glove. I fully stand behind the 9/10 review score I gave it back in October and actually am going to bump it up to a 9.5 because it is simply the best glove I have ever encountered.

So thats the review. Let me know your opinions do you agree with me or not? Send me your opinions on Instagram, Twitter and Youtube @ Trav4oilers and follow me up for more exclusive content. I want to thank you all a lot of looking at this article.