So in this article I want to break down my Brian’s Gnetik 3 leg pads I got back in November. So this IS NOT a heritage pad or optik or a blend of optik and heritage. It’s a Gnetik 3 pads that is spec’d out to be as “Optik” as possible. Essentially a 1 off. They have the hardest face foams brian’s makes (Optik foams), the Opti-slide (primo sliding surface and bindingless sliding surface) and then the addition of a leather strap below knee from the knee cradle and removal of the boot strap.

The checkerboard graphic, Brian’s absolutely nailed. I felt that after the last Padskinz set I did on my Bauer 1S set (with the Potvin wing/flare look) I wanted to incorporate that into the graphic because as much as I love the “classic look” I want to be original and at least throw my spin on it. So we added the “flare” graphic on the knee area and added stitching to give the illusion of the classic knee rolls on the traditional checkerboard design. Outside of the checkerboard, I made the entire gusset solid navy nylon with a classic brains logo, sock graphic on the wrap to again follow the “trend setting theme”, and the custom team logo and last name on the inside thigh rise of the leg channel. 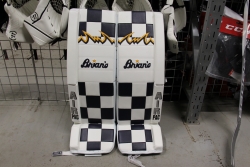 So again to reiterate, They have the hardest face foams brian’s makes (Optik foams), the Opti-slide (primo sliding surface and bindingless sliding surface) and then the addition of a leather strap below knee from the knee cradle and removal of the boot strap. This is a single break on the outside pad with a 1-2-3 internal flex. Stock optik leg channel and 36+1 sizing.

So after switching from the Bauer Supreme 1s line of gear and using it for over a year I was pretty sold on it. So I love the hard rebounds that come off the pads, I like the stiffness but there is a lot of over rotation on the pads consistently and torque in the thighrise that leads to a slightly more open five hole. So to be brutally honest I like my 1S pads better, I feel better and look better movement wise and feel cleaner with my movements however, the confidence you get from the visuals of the gear (in this case the checkerboard graphic) and I don’t know why but I just concluded the best statistical season of my career and topped it off with a college commitment. The confidence these Brian’s pads give me is what makes me want to consistently wear and I feel that is what has been a big factor in the improvement in my performance this season.

It’s a little early in the process to comment on the long-term durability but to date I haven’t had a single issue with the issue with the pads, nothing has discolored mostly due to getting most of the nylons dark coloured. The pads has softened up quite noticeably considering they are supposed to be bricks in regards to stiffness.

Love the pads, love the graphic. I feel great about my game every time I step on the ice with them and statistically is where the evidence lies. So thanks for taking the time to read this. If you want to see more action with this glove or any semi-entertaining content on the internet, hit me up on YouTube or social media.