So in this article I want to break down my Bauer Vapor 1X Goal stick. I got my first Vapor goal stick in August 2017, and 2nd the last couple days of September 2017 after WestJet lost my sticks on my “infamous” LA kings tryout. So, lets dig in.

So, I’m a religious fan of the Bauer Supreme Sticks. From the original One100 a few years ago to the TotalOne, TotalOne NXG and now the 1S and the upcoming 2S. I think the Bauer composite supreme sticks are the greatest thing since sliced bread. However, I haven’t had a great experience with the Vapor/Reactor sticks in the past. Last reactor hybrid I had lasted 3 weeks and broke at the blade. So, I was a little on the fence about trying one especially when they’re $300 for a stick. 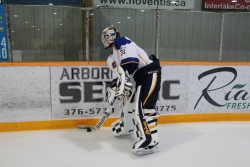 So again trying to keep in mind that this isn’t a supreme stick. So, it isn’t going to be retardedly light and have a wicked amount of torque/whip when puck handling the stick is alright. It feels slightly clunky and heavy when on the ice. It looks like a composite but it doesn’t play like one. I love a good responsive feel when deflecting pucks and I NEEEEEED a lot of flex with my stick when puck handling cause I feel it just makes things flow and I can honestly say my puck handling is drastically worse with the Vapor 1X goal stick.

So, my original Vapor 1x lasted about 2 months before it snapped and then the freebie I got from WestJet lasted about 6 months but during that time I used the stick probably 5-10 times so durability is extremely lacking here.

For the price I would never spend the money on another Vapor 1X goal stick. Just no durability and not enough performance and it continues the trends lay down by previous vapor and Reactor goal sticks. On the other hand, I can’t wait to try out a new 2S stick when they launch at retail in May. So thanks for taking the time to read this. If you want to see more action with this glove or any semi-entertaining content on the internet, hit me up on YouTube or social media.