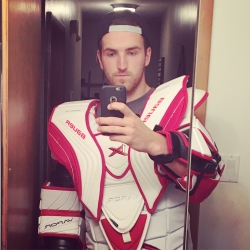 After going on a multi year hiatus and being replaced by the Reactor line a few years ago, Vapor is finally back.

I got this Vapor 1X chest protector 2 days ago so today I want to give you my honest 1st impressions of it. Lets set the tone because I’ve only ever worn a Vaughn chest protector. Personally I have never been a fan of the products Vaughn has put out but when it comes to chest pads Vaughn has been making the best on the market in the 11 years I’ve been a goaltender for (2006). I’ve worn…..

I’ve had the Vision 9500 since 2013. So you’re probably wondering why I picked up a new chest pad, and more importantly why Vapor?

Why Did I Buy Vapor?

I picked up my Vision in July 2013, and since then it’s gotten very soft, discoloured and generally speaking just worn down. I’m a “if it ain’t broke, don’t fix it” kind of guy but I’ve had a lot of messages on social media and people in person tell me that maybe it’s time for a new one. After multiple hours spent in my local sports shop trying on chest pads (1S, 1X, Sub 3, CCM, SLR, Velocity, etc), chatting with the goalie specialists and a few Instagram stories later I had made my decision. 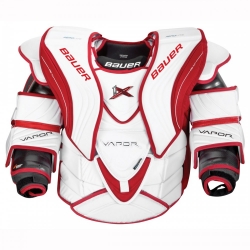 What Is So Good About it?

So aside from the shorter arms and neck/shoulder mobility that got me sold on it, there were a few more things that I really liked, which lead to pulling the trigger on this model.

The AeroLite materials on the floaters are a super light weight type of plastic (not sure the specifics on that) but they felt really good and I think the best way to describe it would be that it feels like it’ll react a lot more “responsive” than the traditional chest protector materials.

On top of that the plastic come white on the stock model and they won’t discolour if they’re plastic, plus there is very little amount of nylons and half of them are red so that’ll give a little extra resale value when/if I go to sell it in 3-4 years from now. 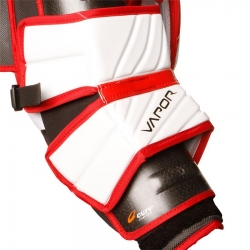 The shoulder floater tabs are easily adjustable so when I start taking pucks off the neck area I can re-adjust it to pull it up a little bit.

Curv Composite is added into the biceps and forearms to create even more stability and protection. Coupled with double shoulder caps and the 37.5 technology which basically makes it dry super fast. Pic of Curv composite below in black.

Also this thing is absolutely stunning from a general weight standpoint, weight distribution and aesthetically out of the box.

I’m not a big fan of the 1 strap system that every manufacturer is going to where it attaches the spine pad to the chest area via click straps on the ribs. I’m used to the 2 strap system and granted

there are no clips on this chest pad (which I wasn’t opened to the idea of that at first), the click straps can break easily from pucks which is why a lot of companies are now putting extra padding overtop of the click straps to protect them from breaking. Instead Bauer has made it an easily adjustable strap without the click straps so its a permanent fixtures on this unit. The straps are adjustable and open more than wide enough to take off the unit with ease (pics below).

Where Do I Go From Here?

Overall I’ve very excited to get using this chest pad. Aesthetically it looks incredible, I would have preferred it in my team colours but for the price point, I couldn’t pass up this unit. I’ll be using it in all of the Junior Hockey Vlogs this season so if you want to see that in action keep an eye out for those Vlogs and hit me up on social media @ Trav4oilers for any and all the goaltending coverage you need online. Full review on this model are going to be coming very soon.

Do you want to improve your stickhandling and dekes at home? There are a …