Hey guys, Trav4 here and today I’m giving you my 1st impression review of the Bauer Supreme 1S Goal Pants(Goalie Monkey Affiliate link). The 1S OD1N line launched just under a year and I’ve reviewed the pad, glove, blocker and stick of the 1S line but I recently bought these 1s pants online slightly used to save a little cash, I needed new pants from the old Bauer Elite’s I’ve been rocking for the last year and also do a little more coverage on the 1s OD1N line.

So there are a few things that I want to cover with mobility. So first off is the fit, and true to the 1s od1n line these pants are a butterfly style of pant. So bulkier, more barrel shaped for a “blocking” style of goaltender. For myself personally I prefer the butterfly style gear but I think it’s because I’m 6’5 because I wouldn’t describe my style of play as “blocking” or “stock and drop”. Granted these pants do have the barrel shape to them but they have an internal which was in the last Reactor line but not in the last NXG model and since I’ve worn 95% Reebok/CCM the past 5 years I am very comfortable and used to an internal belt. I don’t think Bauer did it right because the belt at the back is switched directly to the pant as opposed to the CCM pants where they have about a 1-2 inch space between the belt and any piece of the pant. Here I feel like the spinal flap piece gave a slightly uncomfortable digging sensation in the back. Obviously I’m not used to this but I’d be interested to see if I feel good about this moving forward. As far as on ice movements (t-push, butterflies, RVH) all of these feel about the exact same as they did in my Bauer Elites but maybe with a touch more protection which I want to talk about next. 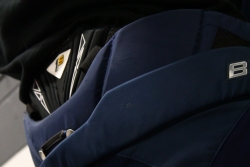 Protection as you would expect is top notch considering this is a pro level pant. Not much protection on the backside to speak of but thats as expected. Not much else to touch on considering I’ve used the pants for an hour so far so that wouldn’t be anywhere near enough time to get some good wear and tear to potentially show up.

Visually I think the pants look great. I took the ab pad out because I may mod it like my old elites and punch eyelits in it too feed skate laces through it. Logos are vibrant stickers instead of stitching which catches my eye now but I really do feel that this sticker stuff Bauer is sticking with is a flash in the pan kind of like white nylons on gear. Looks incredible at first but after a while they fade, they wear, etc and snow balls from there. But I haven’t had any issues yet with the sticks since I’ve had such little wear on them. 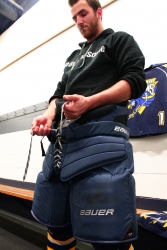 What I am expecting moving forward

I expect much of the same. I’m gonna try to resolve the spinal flap issue. put the skate laces through the ab pad and hope that these perform. The $300 price tag is expensive (I paid $150 CND used online) but I think that in the long hall these pants will provide value, be durable and ultimately be the pants I’m wearing when I play my final game of Junior hockey this coming season. 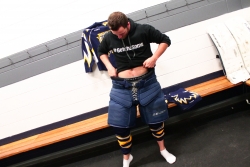 So thats my 1st impression preview of the Bauer Supreme 1S goal pants. What do you think? Do you have them or not? Like them or not? Whatever it may be let me know on social media all @ Trav4oilers. Thanks for reading the article and I’ll see you again in the next video.

If you’re interested in picking up the 1S pants, they are currently $329 on Goalie Monkey