Possibly the biggest product release of 2016 was none other than the CCM Super Tacks Skate. CCM Hockey has released a one-piece, carbon composite boot featuring their “Monoframe 360” technology. Essentially, CCM has forgone the days of a two-piece boot (the boot, fused to an outsole) and introduced a skate with greater moldability and greater energy transfer. The result is one of the (arguably) most innovative and comfortable skates that I’ve had the pleasure of wearing. This review will give a brief overview of the specs of the skate, as well as my personal feedback and impressions.

The Super Tacks Skate features an anatomical fit, with an anatomical heel lock and medium volume boot. In layman’s terms, it wraps around the entirety of your heel promoting “zero negative space”; and is a boot that fits a slightly wider forefoot. Although I’m typically a Bauer fan (as far as skates go), I was blown away by the heel lock. It was the first skate I’ve ever tried on where I could hear my heel being sucked in! Imagine sliding your foot into a skate boot, and hearing the same noise you hear from suction cups; already, I was pleasantly surprised and impressed.

The fit of the boot was phenomenal. I have a wide forefoot and an average width heel, so the initial shape of the boot was already a good match. With that in mind, the boot only gets better during molding. A co-worker of mine often gives the reassurance that “CCM Skates typically feel the most awkward out of the box, but feel the best after heat molding”. I cannot stress how well the Super Tacks skate molded to my feet. As far as skate history goes, I’ve used the Bauer Supreme 190, Easton Mako 2 and the Bauer APX2 (replaced by the Vapor 1X skates): but the Super Tacks possibly may have been the best molding skate so far. I’ll attribute that to the composite boot, the T-Form core, and the lack of an outsole. I really do believe that the one-piece boot does wonders for players in terms of providing them with a custom fit, with as little negative space as possible.

Before discussing the on-ice use of the skate, I’d like to establish what my “ideal skate” includes in terms of performance. For me, I seek a skate that’s responsive, transfers energy well, is relatively lightweight, and gives a healthy amount of forward flex. The Super Tacks skate has met all of those expectations in stride. Once again, the one-piece boot frame makes a huge impact as far as energy transfer goes. Strides feel more efficient, and each push seems like it can generate more power than with my previous skates.

After several weeks of use, there were a number of acknowledgements that I had made with the skates. First off, make no mistake, the boot really does feature “pro level stiffness”. I weigh in at 165 lbs, skating anywhere from 5-7 times a week (a mix of playing and coaching). With that in mind, I still found the boot incredibly stiff. I noticed this on tight turns or when my foot was in a position where I leaned towards the left or right. For someone heavier, or for teenagers and young adults who are still in competitive hockey programs, I think they’d have no issue with this. However, for a recreational player or a lighter child who’s barely 120 lbs, they might find the boot too stiff. One issue I see as both a hockey store employee and a coach, are players who purchase skates that are too stiff to properly use. I find this problematic as it fails to give kids the proper amount of forward flex in their stride. Now, this isn’t so much a knock against the skate, simply an acknowledgement from extended use.

Another aspect I noticed was the Blacksteel. Having used Bauer and Easton skates previously, it was my first opportunity to skate on CCM’s newest steel. I was pleasantly surprised the quality of the edges and the overall feel of the steel. Once again, I felt like energy was maintained and transferred over consistently, and I’ll attribute part of that to the steel. I was also quite happy with the SpeedBlade 4.0 holder. I’m a huge advocate of having forward lean in a boot and always being on the balls of your feet when in stride; thus I think the holder is well designed in placing you higher and in a better position to skate. Typically I get my skates profiled with an aggressive forward lean, with the SpeedBlade holder I feel like I wouldn’t need a profile. 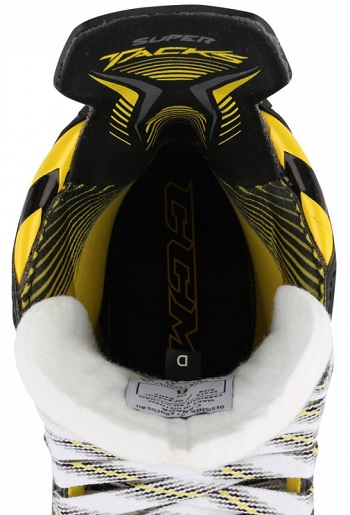 There are a number of other features that to me, only added to the quality of the skate. The first is the abrasion patches on the inner sides of the boot. I cannot speak highly enough of this feature in any skates. For those wondering what it does, consider that your strides also cause a movement in the tongue of your skate, and possibly shin pads. With the rubbing of two other materials on the inside of your boot, some older skates I’ve had have ripped open and worn down prematurely. The abrasion patch will add longevity and extra durability to the skate. A small feature? Perhaps, but for myself and for players on the ice multiple times a week, it makes a huge difference.

Another aspect I love, is the comfort pad around the collar of the boot. This just adds comfort and prevents the skate from digging into a player’s ankles when making tight turns or when getting low. Again, a small feature that makes a huge difference for me. The skate also has what CCM calls their “TotalDri Liner”, which keeps the skate light and the foot dry. While it’s not my favourite material (as far as liners go), it’s important for me that the skate remains lightweight during games.

As someone who’s been a Bauer advocate for years, I feel I can truly say this without bias. This really is one of the most revolutionary boots on the market right now. Alongside VH Hockey, they’ve truly taken the skate world by storm with a one-piece boot. Therefore, here are my final thoughts and TLDR version of my review.

Fit: Phenomenal fit, with fantastic molding properties. That said, will it fit every foot shape known to man? Sadly no. If you’re a player with a narrow foot and heel, perhaps stick to your current skates, or look forward to the CCM Jetspeed FT1 (CCM’s one-piece Jetspeed model).

Performance: The boot performs incredibly well. I’ve mentioned it a number of times in the review, but the one-piece boot does so much in terms of energy transfer and generating power in your strides. That being said, do keep in mind that the boot is remarkably stiff. Know what you’re getting into, and that the stiffest boot isn’t always the best.

Aesthetics: The design is sharp. You can see the carbon of the boot, with enough yellow to make it stand out, yet not unattractive or too bright. The BlackSteel is a nice touch as well.

Durability: The boot is stiff, and although I didn’t mention it, the tendon guard is as well. The tongue is also pro felt tongue, that’s thick and features a lace-bite guard. The skate is literally a tank, I’m confident that it’ll withstand any kind of work that a player puts into it.

Price: The Tacks skate comes up at $999/$649 for the Senior and Junior model (in Canadian dollars). This is the price for most top end skates now, with some models possibly being $50-100 lower. Is the skate worth it? If you’re on the ice multiple times a week, or playing competitively, absolutely. Comparatively, most other skates on the market are fairly close to that price point. All of Bauer’s flagship models rank in at the same price point, as well as VH skates. The only other high end models with a lower price point are the CCM Jetspeed and CCM Ribcor 50k (although both models will soon be replaced with their upgrades). So with the premium price for top of the line skates, these will not fall short.

Overall, CCM has released a fantastic skate. If it fits your level of play and the fit is right, then I’m confident any player would enjoy and benefit the performance and comfort that comes with it. Needless to say, I’m only excited to see what CCM will come up with in the future.

If you’re looking to buy new gear, or upgrade your current equipment we recommend you browse our site sponsors below. You can get a good idea of current prices, and what’s available.

A good hockey player will have quick hands and a powerful shot, in order …